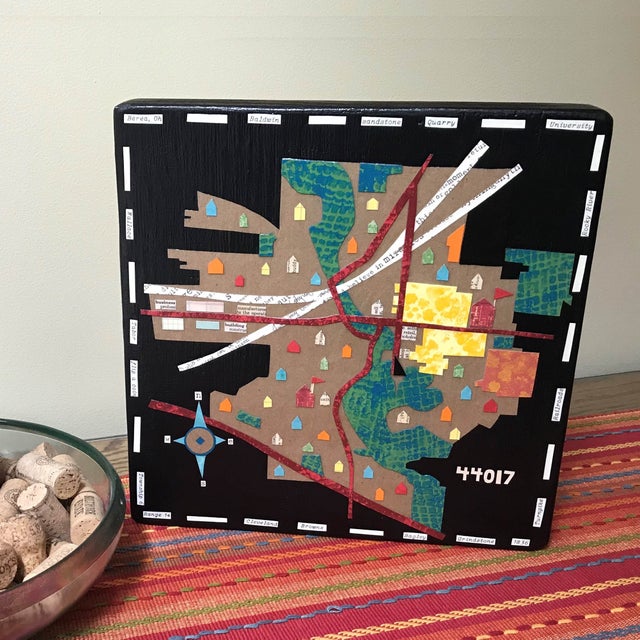 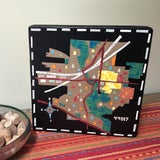 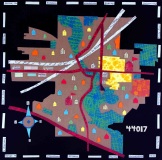 The story and inspiration for the artwork:

For those of you who are not familiar with Berea let me share a little bit about my city.

The town was founded in 1836 and, as the story goes, the name Berea beat out the alternate name of Tabor through a flip of a coin. Berea is 24 miles southwest of Cleveland. Today, on first glance, Berea may seem like just one of many suburbs, but upon further observation, it becomes clear that the town's history makes Berea extra special.

Berea was known as the "Grindstone Capital of the World" due to the sandstone quarries that operated in the town from the 1830's into the 1930's. These former quarries are now a cherished part of the Cleveland Metroparks that run diagonally through Berea and Coe Lake Park. At these magnificent parks we get to enjoy biking and bridle trails, picnic areas, hiking paths, beautiful waterfalls, gazebos, outdoor concerts and so much more! The are a perfect neslted

The town square is iconic Americana, but Berea's downtown, is a Triangle. A downtown, filled with shops, restaurants and gathering places. In the past 20 years, I have seen the Triangle in various states of economic liveliness, but today, with the addition of building just north of the Triangle, I see new life in the heart of our lovely city.

Baldwin Wallace University (BW) is also a wonderful part of Berea. The school was founded in 1845 as Baldwin Institute and eventually the school merged with nearby German Wallace College in 1914. Much of the BW campus is adorned with gorgeous sandstone buildings, built with stone from the local quarries. It truly is a beautiful campus.

The Cuyahoga County Fairground sits on the eastern edge of Berea. The fairgrounds were established in Berea in 1893. While, it is no longer in a agricultural area, I imagine in its heyday, it was quite and adventure for Clevelanders to travel to rural Berea to enjoy the annual fair.

Berea is also home to the Cleveland Browns. Every late July and early August, Bereans get to enjoy a sea of orange and brown fans heading down Beech St. to attend training camp. It is a pilgrimage for many dedicated fans, and my boys have reaped the benefits of the crowds by hosting a lemonade stand each year. It has been fun to watch these budding entrepreneurs learn valuable lessons.

There are many reasons why I love Berea but mostly, I appreciate that it has the charm of a small college town, with the conveniences of suburban living, yet close enough to enjoy outings in a large city.

Making a piece of artwork celebrating Berea, adds a little bit of happy into my world! I hope you like it too!